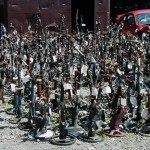 As the auto industry has shifted quickly in so many different ways over the past couple years, there has been runoff across tons of industry. Obviously component and material production, such as plastic and sheet metal, have been booming as a direct result. There is however less obvious peripheral boom in business segments you probably never thought of.

Remember the “Cash for Clunkers” program? In late 2009, the administration subsidized great rebate programs for consumers to encourage more fuel efficient automobiles on the road. Thanks to the scare at the pump, with $4 per gallon looming, consumers came running. Getting rid of their gas guzzlers as fast as possible was the name of the game and scrap metal in salvage yards became cheap and plentiful.

The auto salvage industry is considered a ‘downstream’ industry to automobile production. Lumped in with such categories as livery service and advertising, this segment includes the actual sale of the automobile, in some regard or another, post-production. And business in metal salvage has been booming. It is the basis for a circular industry, crucial for ecological-friendly and an efficient means of production. It is the axis for turning 1979 Buicks into soaring glass skyscrapers in Dubai or a dilapidated grain silo in Kansas to a bullet train connecting Shanghai to Guangzhou.

So as car buyers turned in their gas guzzling, dated SUVs for cars with the latest electric and hybrid technology, the scrapyards scrap and sell off the metal by the truck…err… train full. Enter metal recycling plants. Recycling plants across the world are processing recycled scrap for total revenue of something to the tune of $80 billion dollars per year. The recycling plants are what make the cubed 1989 Toyota Camry usable for the end user, such as a builder or an alloy refiner.

Scrap metal makes up the composition of 60% of all alloys produced across the world, including in new car production. Aside from this, it’s used in everything from building materials in booming in booming city centers across the globe. It is actually the top US export to China, with the nearly 8,000 metal recyclers having shipped $11.3 billion in 2011 alone. China actually acquires 75% of all American scrap aluminum and as the country is seeing a building boom unlike any before, this figure is not about to waning.

The shifting winds across automobile manufacturing since the bailout have left a brand new economy in its wake. Actually employing fewer since 2007- a far cry from the 10% of the labor forced once claimed by those pitching the bailout- the auto industry itself is new industry, entirely. More centered on quality control, automobile manufacturing has trimmed the fat on labor and money-draining projects (ie Oldsmobile, Plymouth and Mercury). But countless industries are thriving thanks to these money saving measures.