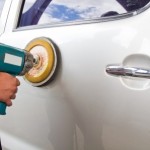 A shopping cart hits your car door, you accidentally bump into your fence when you’re puling out the driveway or your parking lot neighbor was a little hasty opening his door. Long after drivers forget them about, reminders remain as a ding or scratch in the paint. But there are some quick steps you might want to try before you file a claim or dole out hundreds to a body shop.

One of the oldest tricks in the book is using dry ice. All you have to do is touch the dry ice to where the dent is, and then repeat the process until the dent is gone. The cold ice makes the metal contract, which essentially pops out the dent. Just make sure to wear proper gloves though so the dry ice doesn’t damage you hands. Also exercise extreme caution with a cloth between the ice and the paint, as dry ice will leave burn marks in the paint.   collision

Also, as long as the area behind the dent is accessible, the mallet can be used to “knock” the dent out. The size of the mallet should match the size of the dent so no further damage is done. To remove the dent, access the backside of the door panel where the dent is and hit as close to the center of the dent as possible. Tap forcefully and with one or two taps, the dent should pop out. These methods seem to be pretty effective for small dents, but it might not have the strength to take out a larger dent.

For a bigger, pressed dents (no pinches), you could try getting it out with a plunger. Place the plunger over the center of the dent and push it into the car. Pump the plunger three or four times to increase the power of the suction. Then, firmly pull the plunger towards yourself. If all goes well, the dent will smoothly pop out leaving virtually no evidence of its existence in the first place.

Dents and dings don’t always require a professional repair. Using one of these processes to get a ding out can leave your car looking like new without your wallet looking sad. So next time you get a dent or ding in your car, don’t panic and keep in mind you can get rid of it without breaking the bank.