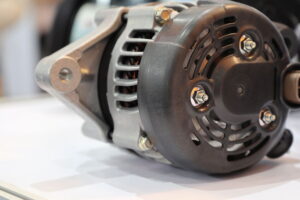 An alternator has an important role in a vehicle. It has a coil (a spool of copper, usually) and magnets known as brushes rotating on an axle, brushing up against the coil to create an electrical charge. This generates an alternating current that connects with various electrical components of the vehicle as well as the battery. If the alternator doesn’t work, your vehicle doesn’t work! So how might you know it’s time to replace an alternator? There are usually five warning signs that there’s a problem…

First, if your vehicle has a hard time starting, that could be a sign it’s time to replace the alternator.

Next, if your vehicle battery seems to be dying, it could be that the alternator isn’t doing its job of recharging the battery so the battery is drained. You might need to jump-start the car using jumper cables just to get it to start!

Thirdly, take a look at your accessory lights and notice whether or not they seem dimmer than usual. If so, your alternator probably isn’t functioning well. Accessory lights include dash lights and the dome light inside the vehicle; The radio could be affected as well. On the exterior of your vehicle, your headlights might dim, too.

What are some other signs it might be time to replace the alternator? If you smell a “burning rubber” smell, that could indicate that the alternator belt isn’t able to rotate on the pulleys. This creates friction, the belt heats up, and the result is that smell. You might also notice a grinding or whining noise– that could indicate a problem with a bearing or voltage regulator.

If you get to the point where you know you need to replace your alternator, rather than buy a brand new one, why not get a good deal on a used one at All American Auto Salvage in Rahway, New Jersey? Call 732-574-1945 for details.